Making it easier and nicer to find and browse your movie collection is the main reason why we created MoviePlayerApp, however, in addition to images, we also created one of the best video player apps along with it.

This guide explains the features and functionality of MoviePlayerApp’s Video player. 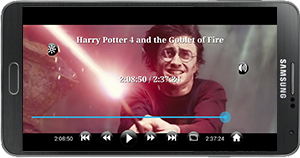 MoviePlayerApp uses the build-in, hardware-accelerated video playback functionality of whichever device you install it on. As a result, it will play your videos without any issues or complications. Unfortunately, it depends on the device you use as to what it supports. Most tablets and smart phones support MP4 video files, while others only work with 3GP or AVI formats. Even then, not every video file is created equal, so depending on what settings were used to create the video, you might run into playback issues.

Eventhough MoviePlayerApp’s video player uses the build-in video capabilities of your device, it adds additional features on top of that.

One feature in particular makes it stand out from the rest in that it remembers the last position for all the content you watch. While this doesn’t sound like much, it is extremely handy for if you are watching a movie but don’t have enough time to finish it. Even if you switch to a different video, maybe to watch/show a clip of some sorts, being able to resume your video right where you left off makes things a lot easier.

Even with large tablets such as the NOOK HD+ and the Galaxy Tab Pro, player buttons have always been a bit small. MoviePlayerApp does have a play/pause button that is a bit larger than the other controls, however, rather than having to find that, you can simply tap anywhere in the video to pause/resume the video.

It used to be standard on video player devices, but for some reasons, companies believe that since everything is getting more “mobile”, they are no longer needed. MoviePlayerApp still has them, and enables you to jump both forward and backward in a video in 22 second and 2 minute intervals.

When you get near the end of a movie or TV show, near the end credits for example, MoviePlayerApp will display a button that will instantly take you to the next one, without having to go back to the selection menu.

When you reach the end of a movie or TV show, MoviePlayerApp can automatically continue with the next one. You can even set it to loop, making it useful for a demo/presentation setup.

button. The way your movies look depends greatly on the original content as well as the screen resolution of your device. The “Fit” and the “Zoom” ones are the ones you will likely be using the most. 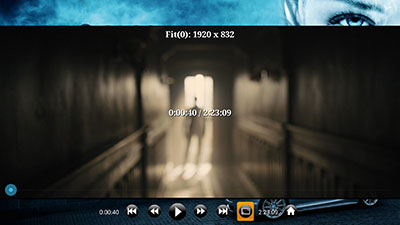 This scales the video to make it fit within the screen resolution of your device. Depending on your device, as well as the content, you might experience borders on top+bottom or the sides. (the background can be turned off, making the borders black)

This will play the video at its original resolution. If you are playing SD (DVD for example) content on an HD screen, you will experience borders on all sides (the background image can be turned off, leaving a black background). 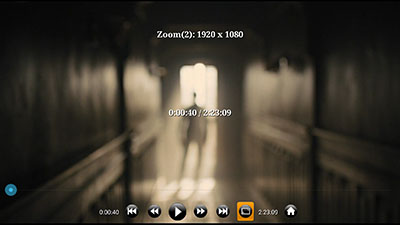 This will scale the video in such a way that it will fill the screen completely. Small parts of the sides (or the top and bottom) will be “cut off”. 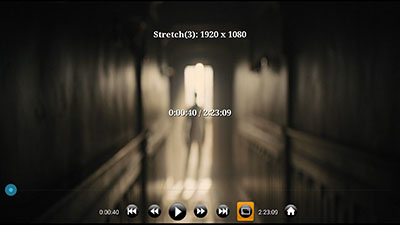 This will scale the video fullscreen, but it changes the size for width and height freely, so nothing of the video gets cut off, however, this can result in a “stretched” look of the movie. With wide-screen movies, people look taller and skinnier (stretched in height).

As mentioned above, things like displaying the background can be turned on/off, as well as a couple of other options. The settings are accessible in the video selection. 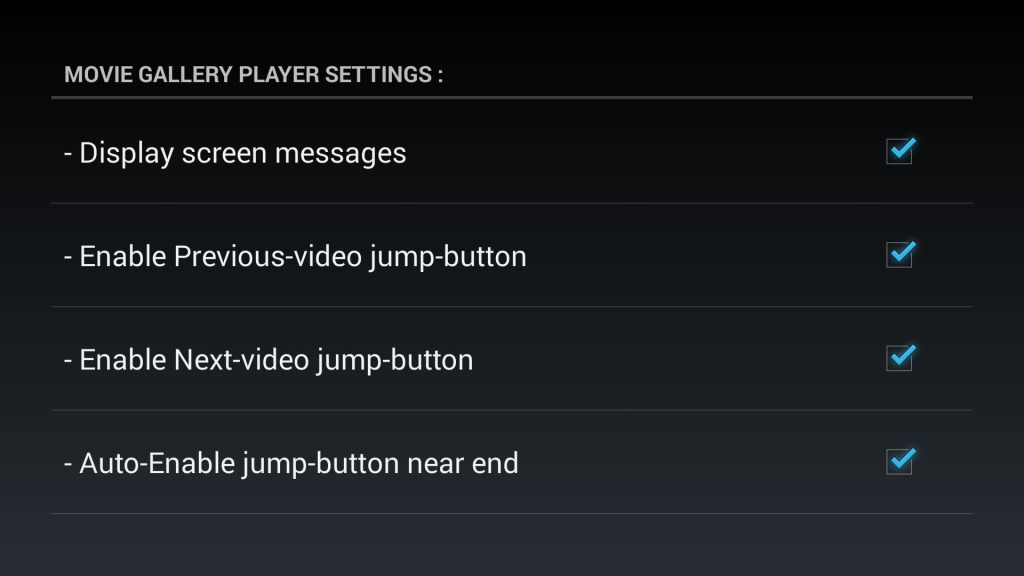 Switching videos and other adjustments will display information when used.

This will display previous/next video buttons at the left/right side of the screen when the player controls are visible.

When the movie/episode is almost over, a button to jump to the next video will appear on the right side. 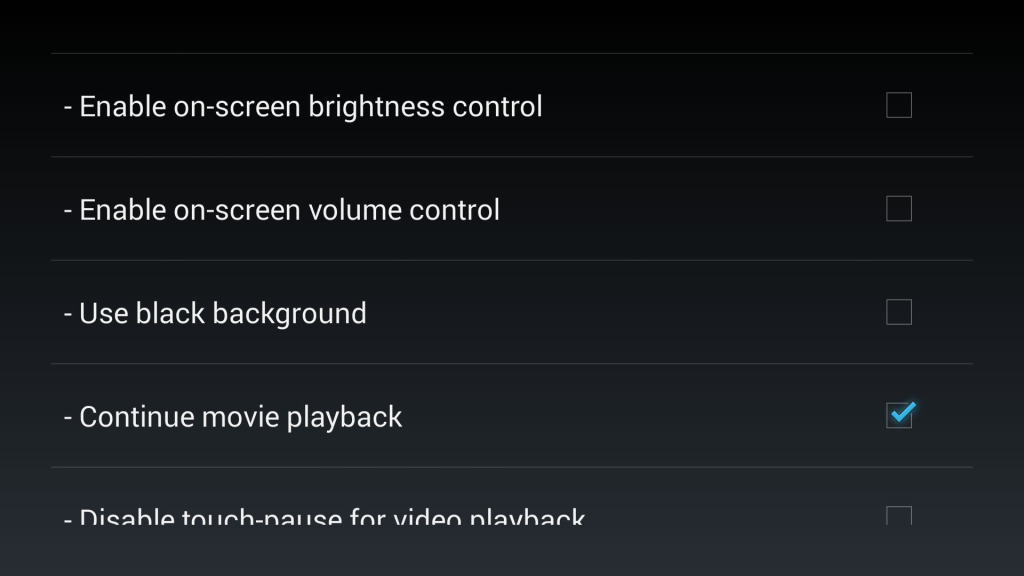 When enabled, it will display these options on the sides of the screen when the player controls are visible.

With this enabled, MoviePlayerApp will keep the background for the video playback black.

MoviePlayerApp will remember where you left off for all your movies. 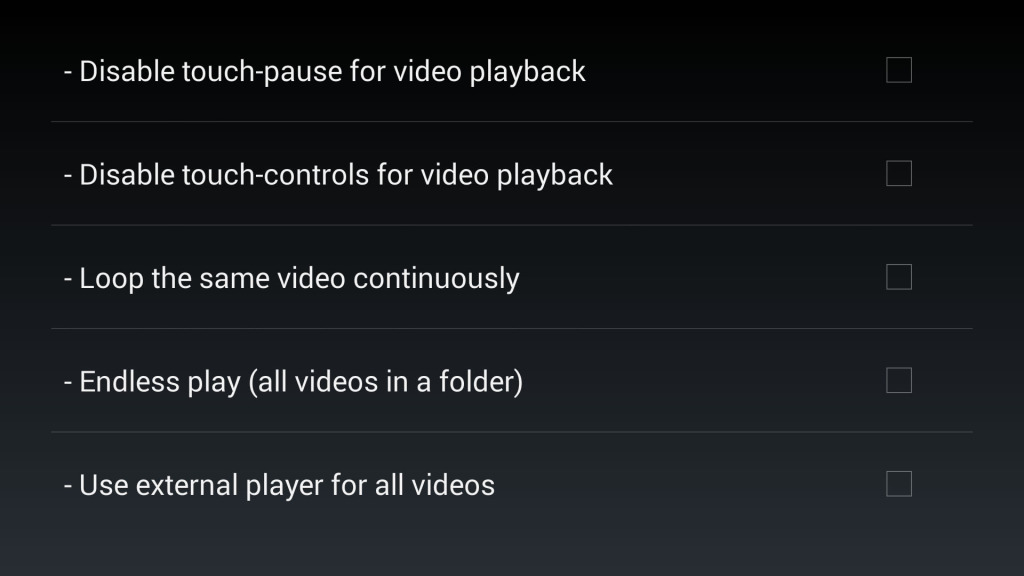 This will prevent MoviePlayerApp from pausing the video when the screen is touched. It will bring up the controls, so video can be paused using the play/pause button.

This just leaves the video playing, touch will do nothing. Handy for child-use.

For presentation purposes, it will continue to play the same video over and over.

This will play all the videos that are in the currently selected view mode of MoviePlayerApp. You can use this to loop a collection of trailers/demo videos for presentation purposes, or to do an evening run of a couple of TV episodes without having to do anything.

* Use external player for all videos.

For non-standard video formats (AVI/MoviePlayerApp automatically uses a video player that does support them (if available on your device) but if you prefer to use a different video player than the one that comes with MoviePlayerApp, enabling this will do so. Of course features such as position remember (since the video is played by something else) do not work with a different player.