Samsung SmartTV Video capabilities. Watch your own videos from a USB stick, from your Samsung Smartphone or stream them directly from your computer.

These steps should be mostly universal, and the steps should apply for other TV brands as well, but for writing this guide, I am using the following:

I also have a few sample videos and my own Video Converter, MKVShrink and Video Scanner applications handy.

For video streaming and screen mirror, the TV and the device with the videos need to be connected to the same network, so a wireless router is also needed.

First, we need to find out what  format the SmartTV video files need to be in order for them to play.

The manual of the TV has this information somewhere. Usually it can be found after the standard features section.

Of course these supported format can differ per TV brand, model and year.

You might already have videos in one of these supported formats, in which case, I’d suggest to try and play in on the TV and see if it works.

Keep in mind that encoding settings used for MP4 and MKV files (the most popular video formats) differ considerably depending on what was made to create the video file, so while one file might work, others might not.

For a first try, the quickest way to try and play a video is to copy it over to a USB stick, and plug the USB stick in the TV and see if it recognizes it. More details below on how to use the USB on your SmartTV, but in short, simply plug the USB stick with your videos into a USB port on your TV, and it should recognize it. Then use your TV remote to get to the videos and try playing one. 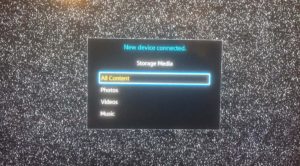 If your video(s) don’t play, you can use Video Converter 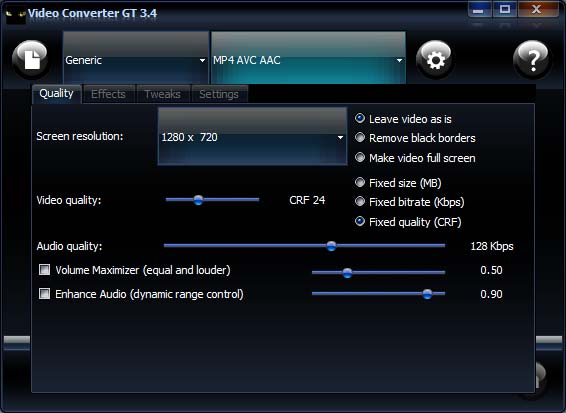 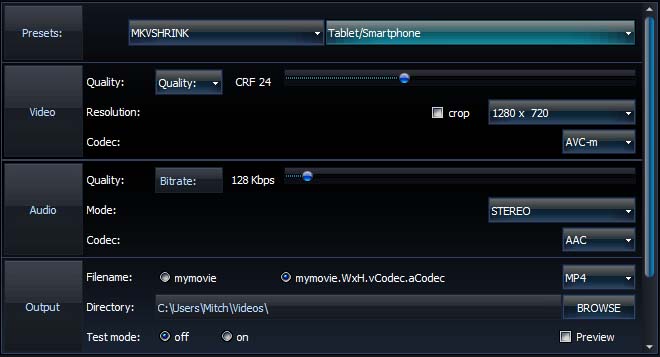 to convert your videos to the proper format.

Now, with your videos in the proper format, lets go into detail about the different ways of getting the videos to play on your SmartTV.

The easiest method. Simply copy the video file(s) you want to watch on your TV onto the USB stick, plug the stick into your TV, and it should recognize them. If not, you might have to tap the “TV Source” button on your TV remote to set the USB stick as the source.

From here, select Videos using your remote, and the available videos on the USB stick should be visible: 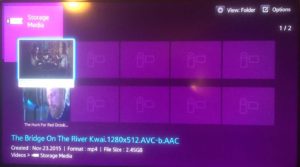 Select the one you want to play, and the SmartTV video playback should start: 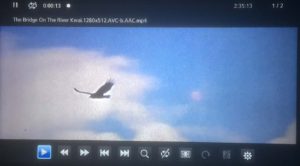 And that is all there is too it for USB Stick playback.

Some SmartTV video can be played from an external USB harddrive as well, but these might need the power connected to an actual power outlet to stay running.

A cool feature on Samsung Smartphones such as the Galaxy and the Note is a feature called screen mirroring. It lets you “beam” the screen and audio from your phone to a SmartTV.

First, make sure that in the settings of your TV that this feature is enabled. Use the TV remote to access the menu, and look for something like Allshare, and it will be located there. Also make sure that your TV is connected to your wireless network while you are in the menu, since this is needed as well. You can also set this up without an actual wireless network by connecting to the wireless accesspoint in the TV, but that goes beyond the scope of this guide.

On your Samsung Smartphone, go into the Settings app, and under the Connections tab, find the screen mirroring feature. It should show a list of available devices (your TV) and allow you to connect. 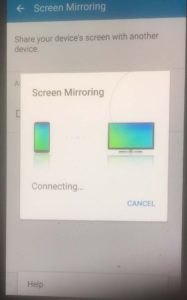 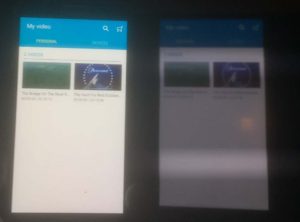 and tap on the video you want to play: 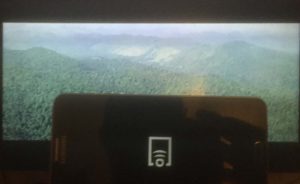 Your phone sill display an icon that it is “beaming” to your TV. Tapping on the phone screen will reveal a remote to access playback features.

This is the most convenient way of accessing you video collection from your TV. Most likely your computer has plenty of storage space for videos, and there is no need to copy them over to a USB stick or your phone. You can just keep them on to your computer and access them directly from your TV.

SmartTVs (and most streaming devices such as a Kodi box), can access content from a so-called DLNA server. If you are running a computer with a Windows 7/Windows 10 operating system, this server capability is already build-in. To enable it, perform these steps: 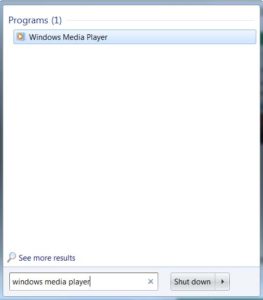 2. In Windows Media Player, click on streaming, and enable the “Automatically allow devices to play my media” setting.

3. On your TV, go to the TV Sources menu, and your new Media Server should appear there.

Selecting the server as a media source will provide access to all the content you have inside the public and your personal media folders,

Similar as to how you would access the videos on your USB stick.

Note: the server option provides access to ALL your media files in these folders, so if other people have access to your TV, they can view the pictures and videos you have in these locations as well.

Each of the different SmartTV Video playback options mentioned above has their advantages and disadvantages.

The USB stick is easy, but requires you to manually copy files over that you want to watch, and you might run into file-size issues due to the size of the stick or file-system limitations. Especially with larger (4GB+) filesizes, things can be a hit and miss.

Screen Mirroring is handy as well, but aside from copying videos to your phone, you are limited to the video playback capabilities of your phone, and also wifi network performance comes into play.

Streaming from your computer is the most convenient, since you have instant access to all your videos, but also network performance can become an issue.

If you are running into storage concerns, either files too large to play, or not enough room on the smartphone or USB stick, Video Converter GT has a “fixed filesize” conversion option. 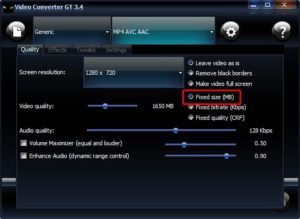 I first came up with this setting back in 2003. I was using a PocketPC with only an 128MB memorycard (!), and to make videos fit, I had to do a lot of calculating. These days, with considerably larger storage solutions, the setting isn’t really needed anymore, however, this setting will make sure that all your videos will not exceed the selected size.

It adjusts the quality settings of the video so that each video will end up with the selected size (or very close to it). For movies to be copied to a USB stick/device, this is perfect, however, keep in mind that this setting will also do the same for shorter clips and TV-show length episodes, in which case it is a bit overkill.

Personally, I prefer for my videos to be “uniform” in quality, meaning they were all created using the same settings, so using a fixed quality setting would be my choice. It will take some test conversions to find your sweet spot in terms of quality and file-size.

If your video keeps buffering, freezing or stuttering during playback, there are a few possible reasons.

Network: Especially if you are streaming and your PC/smartphone source device as well as your SmartTV are connected to Wifi, it can cause playback issues with higher quality video files. With both devices on Wifi, the video data being sent over Wifi is double that of the actual video file. From the source device (computer/phone) to the router over wifi, and then from the router to the TV over wifi. If possible connect at least one of the devices to a wired network port on your router, so that the data is only sent over wifi once. Connecting both devices to a wired port on your router will be even better since a wired connection is still faster that wireless.

Video / Audio format: If your video files are created using settings not supported by your SmartTV, you will run into playback issues. Video encoding has 1000’s of different setting combinations, and not all of these settings are supported by all devices, or are too demanding to be able to be played in real time. In most cases, a generic Android / Apple compatible video and audio format will work best.

Quality: Aside from the above, the quality of your video files can be an issue as well. Even if the advanced settings are compatible, using quality settings too high for your network or your TV to handle will result in playback issues such as freezing and buffering.

Note: the steps below are for performance testing of your network and your TV capabilities, and are only needed for your initial setup and if you run into playback issues later.

Using Video Scanner Alpha (link), you can get an idea on where you might run into problems with video playback before you run into video issues on the couch.

(note, it can take a minute on some files before the graph shows)

Look for “peaks” in the video:

This shows that the video quality around the 6314 seconds (divide by 60 for a minute position,105 minute mark in this case) is the highest, so I would do a test view and skip to this section in the video on the TV to make sure it can handle it. If it does, if desired, you can use higher quality settings for your videos, if not, use lower quality settings.

Keep in mind that if you are going for high quality streaming, if someone else in the house is using wifi to stream Netflix or online gaming, that that will affect playback performance as well.

If your source videos are high quality MKV files, maybe created from Bluray or something similar, I’d recommend using MKVShrink over Video Converter.

For best quality, I’d suggest these settings in MKVShrink GT:

Quality: mode set to quality, with a CRF of 20. Lower is better, but below 20, it is really hard to tell the difference between the original and the converted video quality, and it will just increase the file-size a lot.

Crop: enabled. This will remove black borders from your video if it has them. Your video might still have borders on the TV, but those will be the pure black from the actual TV, and not dark grey as part of the video and then added black from the TV.

Video codec: AVC-h. This is where compatibility comes into play. AVC-h uses advanced settings for higher quality, however, older devices might not play files using this codec. AVC-m is a bit less severe with advanced settings, and is supported by most current devices. For older devices, AVC-b is the most compatible format, and works on just about anything that can play AVC video.

Audio codec: Copy. This will keep the original audio from your video file as is. The TV should be able to handle most of the audio formats commonly used in video files, however, if you end up with no sound on your TV, try AC3 Surround at 448Kbps or higher.

Output: You can use MP4 or MKV, which should work for most TV’s. MP4 is more common though. Personally I prefer to be able to see video file information without actually opening the file, so I have it set to mymovie.WxH.vCodec.aCodec (which displays the resolution and codecs used) for the filename.

Test mode on is useful to do compatibility tests on your TV. it will only create a short clip, which converts faster than a full movie file.