Unlike most video player apps, MoviePlayerApp scans a device for videos when you start the app. It will look in all accessible folders for videos, and if it finds any, it will make them accessible inside the app interface by means of cover images. To make the browsing of videos files easier, it will also allow you to select a folder where videos are located, and it will only show the videos inside that folder (and its sub folders) by tapping the folder icon and selecting the folder you want. 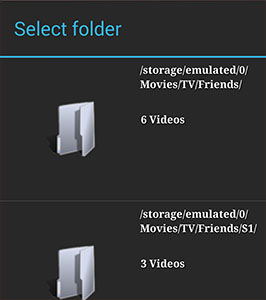 This article describes different solutions for when you encounter a No Videos Found in MoviePlayerApp.

There are no videos (or compatible videos) stored on your device.

For your convenience, below a sample zip file with a video file that works on just about all the devices that MoviePlayerApp runs on. The zip file includes images that can be used by MoviePlayerApp (cover image, background image) as well, but those are not required.

and copy the sample video to your device

and then either restart MoviePlayerApp, or tap the rescan/refresh button.

(note: the sample video file will not work on the FireTV, because, well, the FireTV doesn’t play local video files).

After MoviePlayerApp scanned your device, it should display the video thumbnail or cover image.

It is possible that an incorrect folder (maybe one you used before, and since then no longer contains videos) is selected. MoviePlayerApp remembers the last thing of everything (even the last play positions for every video you watch), so it might be set to an empty (or no longer existing) folder. It should automatically switch to the “root” of your device (the master folder under which everything is located) but maybe it did not.

Tap on the folder icon

Tap on it, and it should show videos.

In MoviePlayerApp, click on the settings button (the gear-looking one), and scroll down to advanced. 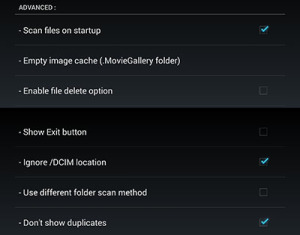 Make sure that “Scan Files On Startup” is enabled.

If it already is enabled, try enabling the “Use different scan method” setting.

Go out of the settings and do a refresh/rescan again.

At this point, you should be able to see/play at least the sample video.

If your own videos still do not show.

On Android-based devices, there are certain “rules” for hiding stuff from apps. For videos, if a “.nomedia” file (no extension, just that) is located in a folder, it will tell apps (including MoviePlayerApp) to ignore the contents of that folder.

In addition, drm-protected videos, such as ones downloaded from the Amazon / Google Play stores, or Netflix downloads, are also not playable by MoviePlayerApp.